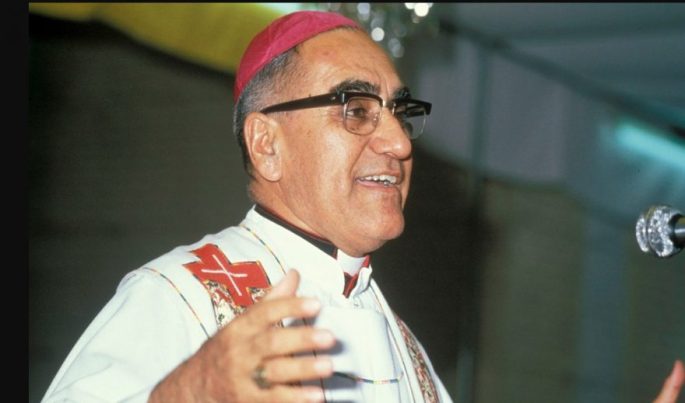 The Price of Everything and the Value of Nothing

On this Lord’s Day, the Church today celebrates a certain Romero (‘a pilgrim to Rome’).

Archbishop Oscar Romero, who the Church will canonize today, was a Salvadoran Archbishop who was martyred for Christ March 24, 1980. While celebrating the Holy Mass in the Chapel of the Good Shepherd an assassin’s bullet pierced his chest. When his blood and water poured forth upon the Earth his Episcopal motto cried out Sentir con la Iglesia (feel with the Church). The Archbishop knew the value of those who the powerful consider nothing. Today he is at rest entombed inside Cathedral in San Salvador. Today he is canonized a Saint.

It is a fitting for today’s Gospel reading MK 10:17-30 is it not? “Good teacher, what must I do to inherit eternal life?”

The Archbishop never used the Gospel as a weapon. He spoke the communion of the Gospel and the interconnectedness of us all in this life. He saw the necessity of dialog between men especially between the powerful and the dispossessed. The Gospel today is a dialog between Jesus and a man, as well as, Jesus and Peter, to wit, What must I do? Then who can be saved? We have given up everything and followed you! In our language today we would summarize: Do? Who? You!

The Archbishop felt that one must feel with the Church for the Gospel to have any rationality. How else can we understand Jesus’ words?

“Amen, I say to you, there is no one who has given up house or brothers or sisters or mother or father or children or lands for my sake and for the sake of the gospel who will not receive a hundred times more now in this present age: houses and brothers and sisters and mothers and children and lands, with persecutions, and eternal life in the age to come.”

How can we understand Jesus? Do you think Peter was instantly satisfied with the answer? Do you suppose he had to think with his heart to understand?

In 258, the Roman Emperor Valerian ordered the archdeacon Lawrence turn over all the riches of the Church. He quickly disbursed the material wealth among the people ignoring the Emperor. Later, when before the Emperor to pay the mandatory treasure, the deacon gestured toward the gathered crowd and said: “These are the true treasures of the Church.”  They were the poor, crippled, blind, and suffering people of … El Salvador.

Spoken shortly before he was assassinated, Archbishop Oscar Romero said:

God’s reign is already present on our earth in mystery. When the Lord comes, it will be brought to perfection. That is the hope that inspires Christians. We know that every effort to better society, especially when injustice and sin are so ingrained, is an effort that God blesses, that God wants, that God demands of us.

I offer you dialog and a certain thinking with the heart. Then let us build the City of God.

Peace be with you,

This site uses Akismet to reduce spam. Learn how your comment data is processed.